Wayne Rooney has publicly thanked the fans for their ‘unbelievable reaction’ during the recent game against Chelsea through his Facebook page. The future of the 27-year old striker has been up in the air all summer, but after putting in a Man of the Match performance against the side that want his signature, he looks set to stay.

Here’s some pictures from Monday Nights game. It was an unbelievable reaction from the fans, so thank you. I really appreciate your support. It means a lot

The sceptic in me wonders about which set of supporters he was speaking about, as both sets of fans were singing his name, but you would certainly like to think that he means the United fans.

It’s the first time Rooney has commented on the saga in any way and could back up reports that Rooney is now willing to stay with the club. 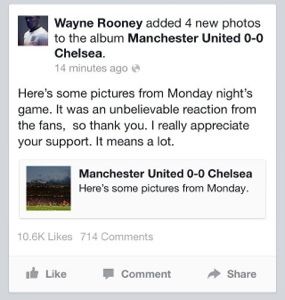 The Curious Case of Wayne Rooney

In October 2010 Wayne Rooney seemed to make the decision that his time at United was up, he requested a transfer from the club giving the reason that he felt the club were unable to […]

Manchester United have struggled at times this season, particularly when it comes to stringing a run of wins together against the so-called lesser teams. It could have been much different without the positive effect of […]

Wayne Rooney has his say on Man United’s form, explains why it’s not Mourinho’s fault

Manchester United Football Club have had a slow start to the season. Jose Mourinho is failing to get the right tune out of his superstar squad. A poor transfer window certainly didn’t help proceedings, while […]