The arrival of Di María will drastically alter the dynamic of a United team in desperate need of rejuvenation. He will provide a dynamism and pace that has been absent from the squad in recent times. However, will he also prompt a change in an unexpected way? And why does this change hinge on the ability of Ander Herrera?

Under the stewardship of Louis van Gaal, United have begun every game in a 3-4-1-2 formation, and although he has hinted that he has designs to play a 4-3-3 in the future, the Dutchman has stated that the 3-5-2 best suits the players at his disposal. This system allows Rooney, Mata, and Van Persie to all play in their favoured positions, however it remains to be seen if Ángel Di María could fit into this system.

While many have criticized the astronomical price tag of Di María, few would question his ability. The Argentine winger was Real Madrid’s second best performer last year, behind only Cristiano Ronaldo. The capstone to his scintillating season at Real Madrid was his dazzling performance in the Champions League final; such a show earned him the man of the match award, and in a beautiful act of foreshadowing, the award was presented by Sir Alex Ferguson.

Last season, Ancelloti deployed Di María as one of the two attacking midfielders in a 4-3-3, however the £56.7 million man previously spent his time at the Bernabeu as a winger.

If United were to keep the 3-4-1-2 formation, which does not include wingers, the only logical place for Di María to play is in the central midfield. Deploying him at wingback would be a waste, as it would stifle his attacking talents. He could operate as a forward, much like Arjen Robben in the World Cup, yet it is unlikely he would upend Rooney or Van Persie from their positions. He could also operate in the ‘number ten’ role, where Mata plays, however Van Gaal will be keen to keep his best players on the pitch, not watching on from the sideline. 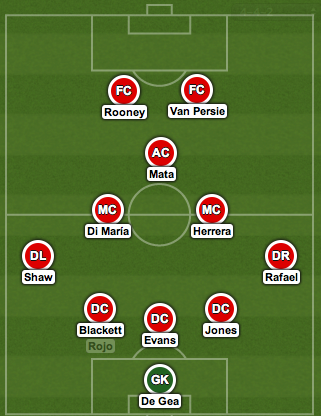 This lineup is alarming absent of almost all defensive cover from the midfield. Di María is a very hard working player, but make no mistake, he is an attacking minded individual. The midfield trio pictured above, while abundant in work rate, is absent of defensive prowess, and is certain to vastly increase the probability of conceding goals.

Although Van Gaal previously stated that the 3-5-2 best suits the squad, yesterday he said, “I can change the system with Di María as he can also play on the wing and in midfield”. This is the first indication Van Gaal has given that he may change the system this season, and given the recent run of appalling results, it must seem appealing to him.

If Van Gaal wishes to keep the attacking trio of Rooney, Van Persie, and Mata, he could transition to a 4-4-2 with a diamond in the midfield, which is also referred to as a 4-3-1-2, something Sir Alex Ferguson experimented with during his final years at Old Trafford. 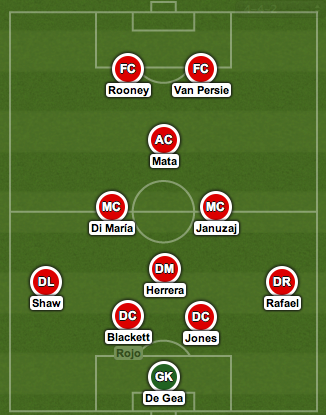 This system not only suits the attacking trio, but also Di María, as he flourished in an identical ‘diamond midfield’ at Benfica.

This formation provides the team with a greater balance, however it hinges on Michael Carrick’s fitness. Aside from Marouane Fellaini, who has seldom featured thus far, Carrick is the only defensive midfielder in the squad; he is the only player who can provide the requisite protection that grants freedom to the attacking unit. Thus, while he is injured the most likely replacement is Ander Herrera; Darren Fletcher could also play here, but Van Gaal will likely prefer the former Athletic Bilbao man.

This places a huge responsibility upon the Spaniards shoulders, as he would have to adjust to a role that is largely unfamiliar to him. Herrera is apt at playmaking from a deeper role and possesses a tenacious work rate, however a holding midfielder also needs to be able to break up play by means of enviable positional intelligence and tackling ability. Thus far, we have only seen Herrera play in a more advanced role, so it remains to be seen if he could be deployed as the teams sole holding midfielder.

There is one more option for the Dutchman, and it is a controversial one, a 4-2-3-1 with Wayne Rooney in the midfield. While there is no doubt that Rooney’s best position lies further up the pitch, should he move into a deeper role for the good of the team? 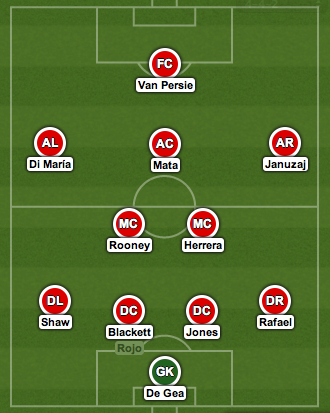 This lineup would not only allow Van Gaal to unleash the devastating pace of Ángel Di María and Adnan Janujaz on the wings, it would provide much more defensive solidity than the aforementioned formations.

A central midfield pairing of including Wayne Rooney is much stronger, as he not only adds his prodigious work rate but the ability to break up attacks. This system would limit Rooney, however it would unleash an attacking quartet of Mata, Di María, Januzaj, and Van Persie. In any other system the attacking unit, including Rooney, would be limited because of a lack of defensive cover.

Ideally, United would be able to call upon a world class holding midfielder, like Arturo Vidal, who could likely hold down the fort by himself. However, to date, that is not an option.

Should Rooney move into the midfield for the good of the team? Where will Di María fit? Leave your comments in the box below.

Out of left-field, Manchester United are seemingly closing in on their first summer signing. Diogo Dalot, the little-known 19-year-old full-back will join his fellow countryman Jose Mourinho at Old Trafford. With problems galore in the […]

Louis van Gaal takes his side to Anfield for Steven Gerrard’s last game against Manchester United as a Premier League player. There is potentially a place in Europe at stake come next season, so United […]